Many of us are using Armbian not just on ARM single board computers but also on servers (bare metal & virtual). We use our builds since we trust it more then Debian, Ubuntu, not to mention other distributions that are recklessly updating and one ends up as an OS tester and not OS user. Personally I use Armbian Jammy on Ryzen 9 workstation with great success. My primary use case is development / productivity. For the road I used to have 13" Dell notebook which recently suddenly died. It was out of warranty so I had to get something new. After some testings of various devices I settled with 12th Gen Intel i5-1240P powered Lenovo. Then I tried many general purpose distros to see how well they work and all had some (minor) troubles ...

We are having UEFI images (common image) since some time, but UEFI nor desktops were fine tuned nor ready for such performance daily driver desktop usage. We were close, but not close enough to just run it. Past two weeks we have been lifting general UEFI support, fixed many bugs and what came out is "Armbian ultimate developers desktop build". 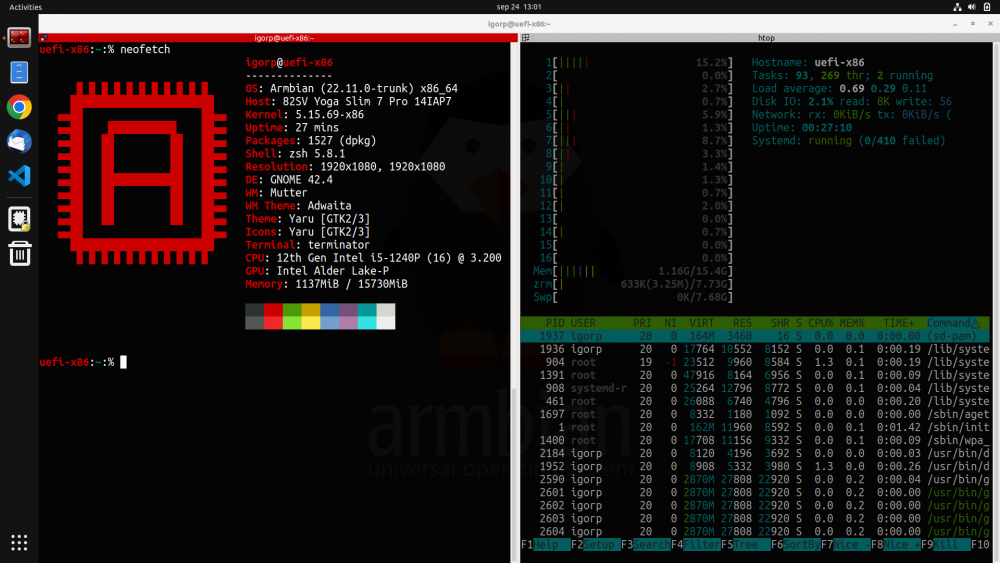 - snapd is not installed (user can install it)

- Intel graphics acceleration also works out of the box

- installation to SSD drive to dual boot with Windows 10/11 is supported Armbian classical way by transferring actual live image to the prepared partition via nand-sata-install. All you need to do is prepare spare space on your drive, Windows 10/11 or Linux, UEFI support (most if not all hardware for past 10 years has it).

I have tweaked images (XFCE, Gnome, Cinnamon) a bit to my personal needs, but making changes is welcome.

Nice to have: disk encryption within nand-sata-install, small bug fixing, additional DEs. Currently we have CLI, XFCE, Gnome and Cinnamon. Others are too buggy.

Please report where it works and how (well)!

19 answers to this question